Who said ginger males were not sexy ? Well, certainly not the british photographer Thomas Knight who has launched his first solo exhibition in New York showing hot red guys to prove they can be perfect leading-man material. 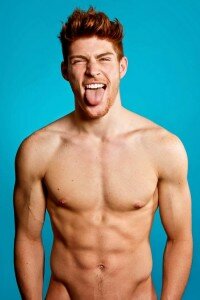 Even if some people had no doubt about it, the fact is stupid prejudices keep saying that redness doesn’t suit men. How many times have I heard : « Having ginger kids ? Why not as lons as they are girls ». So-called this hair color and fair skin would match better on women. So-called, redhead men would not be seducing. Really ??

So. Once and for all. Let’s review our basics : on earth, some people are very attractive and some others less attractive (and even then, beauty preferences are very personnal). So some people won a genetic lottery while some other did not. Yes, life is unfair. BUT, it is absolutly nothing to do with hair or skin colors. Some brown hair guys are ugly while some redhead guys are gorgeous !

You are still not convinced ? Do you need proofs ?

Thomas Kinght has got hundred of them to show you ! The artist (ginger as well and who dyed his hair blond for many years because he was tired of the bad jokes) travelled the world and shot 100 redhead guys. You could admire his work in New York until september 14th, this week-end during the Redhair day in Breda or in his book RED HOT 100.

« Red headed actors are portrayed as undesirable, angry, and weak characters – or the bad guy,’ said the 31-year-old photographer, adding: ‘They are never the heartthrob, the hero or the action star, and it has created this notion that all ginger men are ugly and weak. I want to show that they’re not ».

Below are two trailers of the exhibition to tease you a little. Pfffiou, I don’t know about you but it’s getting hot in here…