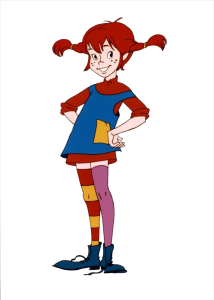 Everyone knows Pippi, and not only the ones who have had to bear that nickname all through their school years. So yes, we all know she is a very strong cartoon character for her short size and has two braids sticking out of each corner of her head, but are you sure you know everything about her?

Originally Pippi is the hero of a series of novels for children written in 1945 by Astrid Lindgren. The adventures of the character were told for the first time to her daughter who was suffering from a lung inflammation. The story was then adapted for TV with the actress Inger Nilsson and then later as a cartoon.

Pippi is ginger, she is 9 and lives in a small Swedish village, sharing the house with her monkey, Mr. Nilsson, and her horse but no adults or relatives. She befriends the two children living next door: Tommy and Annika Settergren. The three have many adventures. Tommy and Annika’s mother, Mrs. Settergren, often disapproves of Pippi’s manners and lack of education, but Mrs. Settergren eventually comes to appreciate that Pippi would never put Tommy and Annika in danger, and that Pippi values her friendship with the pair above almost anything else in her life. Pippi’s two main possessions are a suitcase full of gold coins (which she used to buy her horse) and a large chest of drawers containing various small treasures. 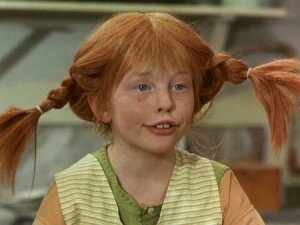 Pippi as a political symbol

A very questionble character at the time, Pippi helped to fight prejudice and sexist stereotype in children’s books and stories. She doesn’t behave, she fights, she only does what she wants to do and basically just never gives the right example. In some ways she is like the avenger of children that she frees from grown up rules and school. She was censored in some countries where she was considered to have a negative influence on children’s education.

Pippi as an active feminist

Strong, funny, audacious, with no complex, Pippi is a rebel and a protestor, and even became, some say, a punk icon in the 80′s.

But most importantly… Pippi’s a ginger!

Pippi is a ginger with a face full of freckles, and proud of it! In one episode, she walks into a store and the woman asks her if she is suffering from her freckles because she could sell her a lotion to get rid of them. Pippi says no but the woman insists : “ But your face is full of stains!”, “I know but I do not suffer from it. I love them. Good day”. In your face sales woman!